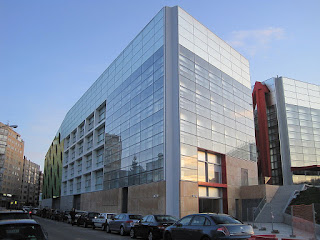 Object of the Call
A selection process to cover the position of Director of the National Research Centre on Human Evolution (Centro Nacional de Investigación sobre la Evolución Humana, CENIEH) is called in virtue of the agreement adopted by its Governing Council the 16th January 2017.
The selection process will be openly managed, according to the requirements and steps explained as follows, and respecting, in any case, the principles of capacity, merit, publicity and competition.
The duration of the contract will be temporary, for a period of four years, although it could be extended in consecutive two-year periods.

Job description
The Director will work for the promotion of the CENIEH’s Strategic Plan, for the consecution of its strategic objectives:
O1:        To promote excellence
O2:        To meet the criteria required for the ICTS (Unique Scientific and Technical Infrastructures)
O3:        To set up an open infrastructure to the scientific, technological and industrial community
O4:        To boost and promote the reception of palaeontological collections, mainly those coming from Atapuerca site
O5:        To establish a management system of resources to guarantee the efficiency, transparency and responsibility
O6:        To strengthen the international visibility of CENIEH
O7:        To increase the visibility of CENIEH through a distinctive communication strategy
O8:        To improve the scientific and technological results
O9:        To achieve the necessary funding to face the objectives of CENIEH
The Director will perform the responsibilities described in the Statutes of the Consortium (article 15), to obtain the maximum achievement of its aims (article 3). His/her functions will be, among others:
The Director will be hired or temporally assigned with an exclusive and full-time dedication to CENIEH. His/her role as Director of CENIEH will be incompatible with other professional activities in the private or public sector.

Candidate’s Requirements
Senior scientist with a remarkable career in CENIEH’s areas of interest.
It will be valued:
Selection process:
The place, date and hour of the interview will be notified in writing to the candidates.

Selection Commission, appointment and starting date
Under the agreement of the Governing Council on the 16th January 2017, the selection process will be carried out by a Selection Commission which. Once concluded, an appointment proposal (based on a motivated report) will be raised to the Governing Council so that it will carry out the appointment stating the starting date.
The Selection Commission will be made up of seven people: five scientists or technologists of recognized national and international prestige, preferably in the areas of interest at CENIEH; as well as a representative of the Regional Government of Castile and Leon, and a representative of the Ministry of Economy, Industry and Competitiveness (the two latter with voice but without vote).

Those interested must submit
These documents must be sent for the attention of the Secretary of the Selection Commission,

These documents must be sent for the attention of the Secretary of the Selection Commission, to the following email address: seleccionCENIEH@mineco.es

All applications received will be treated confidentially. The candidate takes responsibility for the truthfulness of the data exposed in the CV and agrees to proof it should it be requested.

Publicity of the communications

The National Research Center on Human Evolution (CENIEH)
CENIEH is a scientific and technical infrastructure opened to the use of the scientific and technological community, that facilitates research into the field of Human Evolution during Pliocene and Pleistocene eras, promoting awareness and transfer of knowledge to society as well as supporting collaboration with excavations at archaeological sites form these periods, both in Spain and in other parts of the world. Besides, CENIEH is also responsible for the conservation, restoration, management and record of palaeontological collections from the excavations at Atapuerca and other sites, both nationally and internationally, with similar characteristics that reach agreements with the Center.
CENIEH is the only infrastructure contained in the Map of Unique Scientific and Technical infrastructure (ICTS) in the field of Humanities.
The center was created as a Consortium between the Ministry of Economy, Industry and
Competitiveness (MINECO) and the Regional Government of Castile and Leon (JCyL), although it depends formally to the State General Administration since May 2016. The Government and Administration bodies of the Consortium are the Governing Council, the Executive Board and the Director.
Publicado por Aragosaurus el 1/23/2017 11:10:00 a. m.